Voluum is a cloud-hosted performance tracking software that offers data analytic insights along with an artificially intelligence-powered optimization tool which makes advertising online much more easier and profitable.

Voluum is an innovative, real-time analytics platform for tracking online campaigns. This system is designed for the use of performance marketers and individual monitors who want to monitor their progress and profitability.

Voluum acts as an end-to-end solution for media buying teams, media and PR agencies, performance marketers, bloggers and anyone who advertises online. Voluum has gained ample endorsement and accreditation as a performance tracking solution and is also often referred to as one of the best platforms in the industry. Voluum has upped its game with the development of its latest feature for buying integrated native media ads. 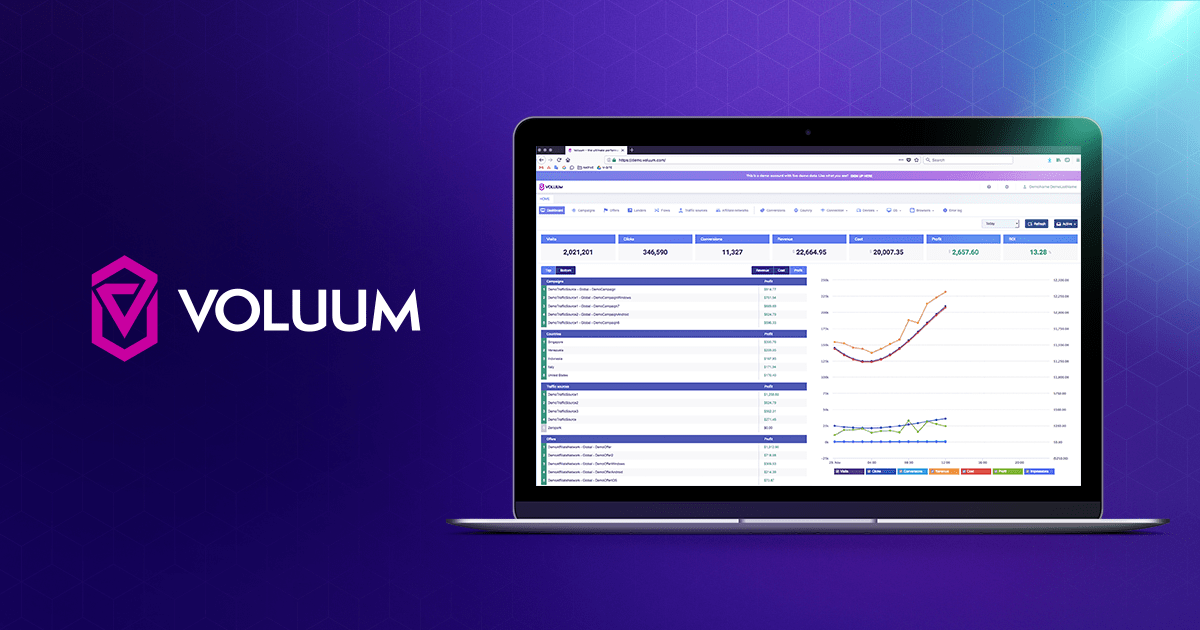 No one can dispute that Voluum is a serious contender in being ranked as one of the best performance tracking software after its users have generated revenues of over $ 1.5 billion every year.

Seamless report generation, flexible campaign setup, and post-install analytics are some features which make media buying and A/B testing which enables the generation of data and gain valuable insights within a matter of minutes.

Also, for marketers who prefer working through an API, the platform is well documented, making it easy to set up the platform and send requests to Voluum. It operates on a SaaS model, which offers unique benefits over utilizing your other tracking solutions. For instance, marketers can work on their campaigns from anywhere as all the data is stored in the cloud, which can be accessed by authorized individuals using the platform’s mobile application, which works both on iOS and Android. Further, marketers have the option of scaling up or down, based on the performance of the campaign. The Voluum platform offers many pricing plans to suit the needs of every user.

During its recent updates, Voluum has made significant additions to its feature, i.e. an integrated DSP which allows marketers to purchase native media directly from the Voluum platform directly. This new feature is a game-changer as now marketers are being offered a unified platform for analytics and media buying.

The Voluum platform is being hosted on nine different data centers all over the world. It means that your data is always being processed and also is safe and secure. In any event, even if a single data center goes down, the traffic is instantly redirected to other operational servers.

The security offered on the Voluum platform can be compared to that of the banking industry; hence marketers and businesses can rest assured that their data is safe and sound. Also, Voluum is continuously updating the anti-fraud solutions offered by the platform. The voluum platform offers third-party integration and its own plug-ins as well. Many of these plug-ins are important for marketers to filter bot traffic which is a menace in digital marketing. Voluum filters everything even before someone bids for media and also filters all traffic seen on its platform.

It can be highly time-consuming to set up campaigns in multiple native ad exchanges, as you might need to continually go back and forth to multiple traffic sources which can take hours. Whereas, on the Voluum platform, this can be done in minutes.

Voluum offers all sources on a single platform where users can select the sources which suit their strategy the best. And using Voluum’s panel, users can optimize every component of their campaign.

During performance marketing, it is vital to regularly check the metrics to ensure everything is going as planned. Whereas using Voluum’s auto-optimization feature works like an autopilot and its algorithm ensures that the campaign is on the right track. The algorithm adjusts bids and disables anything which is performing poorly, such as creatives, traffic sources, and other assets.

I hope now you are clear with the question, Is Voluum A Best Performance Tracking Tool for affiliate marketers?. While many might consider the Voluum platform suitable only for performance marketing, it can be beneficial for bloggers as well. For instance, promoting your website using multi-channel campaigns, you will be able to track the real-time performance of your campaign from a single platform, and get genuine insights from your traffic.

This makes Voluum probably one of the best performance tracking tools available in the marketplace, for everyone, right from an individual blogger to a large-sized marketing giant. We hope that you all got the basic knowledge about the Voluum that can be useful for your business through this article. Please let us know your feedbacks after experimenting with it and also comment on your queries if any. We will try our best to reach out to you.