Want to succeed in life? Then this Four Percent Group Review might be a turning point in your life. Everybody certainly wants to lead a good and comfortable life. For that, you will be needing money. There are many ways of getting rich, and one of the methods is by signing up for the Four Percent Group program. Its makers claim it to be a way through which one can become a successful promoter. You will be able to learn some of the best marketing and promotion strategies to make your website a money-making machine.

As per the website, Four percent group claims that with the help of the Four Percent Challenge by Four Percent Group, one can easily master topics such as e-commerce, brand promotion through influencer marketing, digital marketing, etc. to name a few. 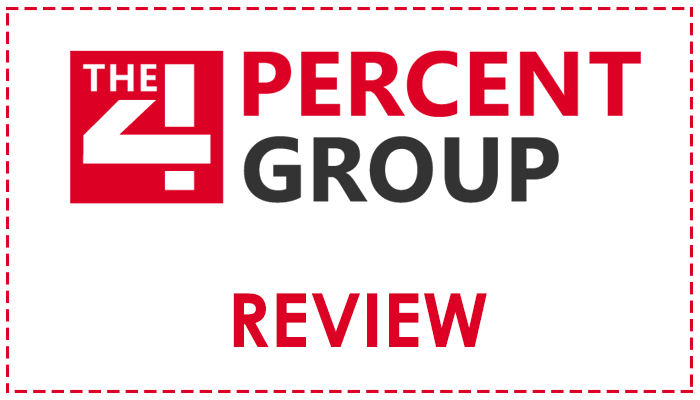 There are a number of Four Percent Group reviews on the internet, but none are comprehensive enough to help you make a decision whether to join the Four Percent promotion or not.

Read on to find out more about the entire concept.

The Four Percent Challenge by Four Percent Group is nothing but a way through which money generation takes place. It has been developed by Vick Strizheus. By signing up for the Four Percent Group, you will be able to create campaigns which are profitable and are able to generate money in a short period of time. You really don’t have to be a marketing master in order to use this product. Even if you are a complete fresher to the whole idea, you will still be able to master the training rather easily.

Its founder, Vick Strizheus claims that the name “Four Percent Group” was coined as a result of the simple concept called human behavior. He says that the group is about 100 people who wish to change their lives for the better. While eighty percent of those people do not do anything to bring about a change, the rest of the sixteen percent of people will actually do something about it but will remain skeptical before doing anything. The last four percent of the people will do something for the better but not make a question out of it… Hence, the name 4-Percent-Group came into existence.

The 4 Percent Group cannot be called as a product but rather a marketing funnel through which an individual can market certain recommended products and make AA neat sum of money from it.

What Is Four Percent Group?

The Four Percent Group is a unique online community which helps people generate large sums of money very easily. By people, we mean people from any background, a field of expertise, age, nationality, etc.  The community consists of over 200,000 members from all around the world. The training offered is solely for online marketing and brings together critical concepts into one easy guide which is perfect for any type of person, be it a beginner or a marketing guru. The contents of this training contain modules which range from SEO techniques and all the way up till email marketing, etc. to name a few.

The most common theme is that all the people find it easy to follow the program. While the sums of earnings posted on the website are very impressive at first, it also manages to raise an eyebrow or two as well.

The Four Percent Group affiliate is nothing but a unique automated marketing system which gives prime focus to giving you access to a number of tools and valuable information which helps you create a 5000 $ per month income mechanism within a month or so. You can even double those earnings in a further 2 months.

The following information is included in the Four Percent Group Clickbank:

Though this concept seems a little eerie at first, as per Four Percent company reviews by genuine customers, the concept is, in fact, generating strides of income for anyone using it. 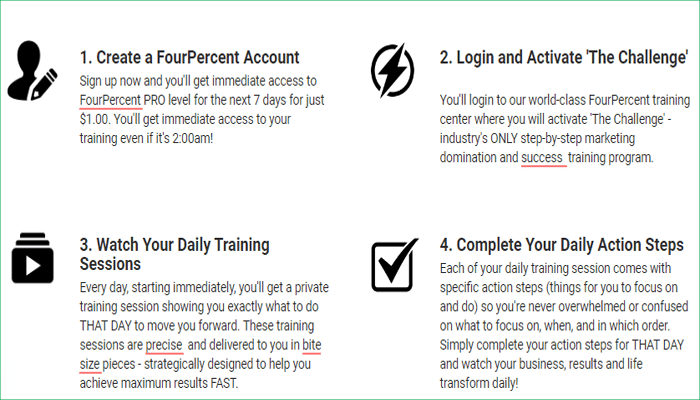 A host of Four Percent Group reviews and case studies have been carried out and the results are nothing short of mesmerizing for the readers. They claim that the program is easy to follow and one can start earning money from the very first week itself

When you sign up to the Four Percent Group, you will be given unlimited access to the VIP members area where you will be able to access good quality training videos along with access to archives consisting of the necessary documents and tools concerning email list building along with the generation of commission.

The four points challenge carries a host of different features to it. In this Four Percent Group review, we have included a few of the prominent ones. They are as follows:

The working of the Four Percent Group marketing funnel can be explained with the help of a few steps.

By just completing step one setup procedure, you will end up completing the rest of the remaining steps relatively easily.

In order to avail the Sales funnel building service, you need to pay about USD 97 per month. Since you are already a Four Percent Group member, the sale page will be ready for you as a plugin. All that needs to be done from the user’s end is that they have to follow the steps in the instruction video and you will be able to sync both the Click Funnels and the Sales Page.

With the sales page already setup, all you need to do is engage with an autoresponder service provided by Aweber. This can be availed at a price of USD 17 per month. The autoresponder service allows the user to capture and store prospective emails and auto-generate an automatic response which will be sent as a follow to any of your prospects. To avail this service, you will have to sync Aweber along with the Click Funnels.

Post completion of the first step, all you have to do is drive traffic to the sales page.

Even as a total beginner, you will be able to use paying ad platforms such as Google Ads, Facebook ads, Bing Ads, etc.  However, it is important to note that by paying money doesn’t mean that success will be guaranteed. The key to generating traffic lies in the craftiness in the ad in order to attract potential traffic to the marketing funnel of the Four Percent Group.

Majorly, beginners fail in these circumstances because they have no clue of what they are doing and the investment ends up becoming a burden for them. 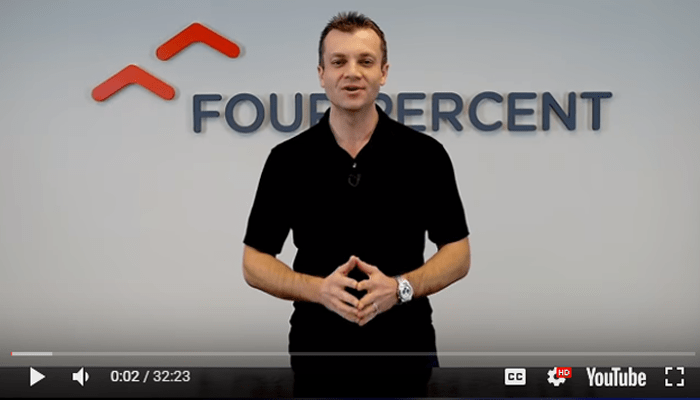 Is Four Percent Group a Scam?

The man behind the curation of successful schemes such as the Big Idea Mastermind and also behind that of the Project Breakthrough, Vick Strizheus created the Four Percent Group. He has been accused of a member of violations with his past projects and was also sent to prison for 9 months on the charge of insurance claim fraud. Though he has managed to redeem himself for his past actions, it still remains a cause of concern for prospective customers interested in the four-point challenge. In a host of Four Percent reviews by former customers, they have raised concerns about the legality of the entire of the project. This doesn’t come as a surprise given Vick’s past history with the Big Idea Mastermind where he switched several affiliate IDs with his ID so that he ended up earning the commission.

It is important to understand that the four-point challenge runs on the idea of affiliate marketing and hence, the understanding of the entire system is necessary before you jump into investing in it.

The Four Percent Group too is an affiliate marketing platform which helps people make tons of money by the means of commission. All you have to do direct customers to the Four Percent marketplace and once a product has been sold, you will be given your rightful commission for it.

Unlike the Big Idea Mastermind where scam products like Empower network were being sold, the Four Percent Group rather concentrates on quality products such as Click Funnels and Aweber. This ensures that the system is not a scam and could be trusted.

Keeping in mind Vick’s past history, it’s only a matter of time until we get to know whether the four-point challenge is a scam or not because as per recent Four Percent Group reviews, it’s a money making machine for all its users.

Looking For a Legitimate Money Making Solution? Check This Out!

Four percent Group results have mostly been on the positive end and this is based on the Four Percent Group reviews by its customers. Yes, it’s a great way to earn money and you will actually end up making it as well. However, it still is risky as the market is rather unpredictable in nature. Hence, calculate your risks wisely before taking any potential step.